Sooooo, during this Covid crisis I have tried to utilize my time and promote my stock beach photos. I'm hoping to continue to do this even after I start photographing people again. I'm going to try and keep sharing my love of the beach and the beauty of this earth with all of you. I'll never be able to hang all these gorgeous photos in my house so I decided why not share them with the world. NOTHING tickles me more than when people purchase my artwork. What I love even more is when they let me know what and where they're going to hang it. Like Fiona, she works on a yacht in the Bahamas and she reached out to let me know that the underwater print that she purchased from me would be hanging in the yacht that she works on! I literally squealed with delight hearing this. Today's print that I'm highlighting is from a few years back when I went to Hawaii. It was my first trip travelling alone right before my divorce was to be finalized. I went to go visit my college roommate Holly (who was also going through a divorce at the same time) and she took me on so many great adventures that week and this trip gave me a new lease on life and hope that my new life of "flying solo" was going to be all right. These are some colorful ukuleles that I found on a day trip to the North Shore. It's a downloadable file that you can print yourself or send to a photo lab and have them print it for you and it's for personal use only. It can be purchased here at Pink Palm Designs Shop 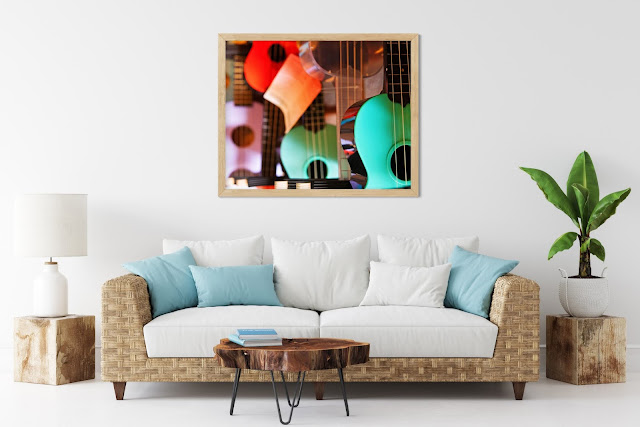 I've added a new photo to my Etsy shop Pink Palm Designs and myFine Art America storefront today. It features one of my photos from when I went to Hawaii a few years ago to visit my college roomie Holly. She's lived there for about 17 years and knows the ins and outs of the island. This particular day we did an amazing hike by a light house...sorry, I should know the name of it but I forgot since it's been several years. On that hike though, the views were spectacular. There were lots of small tide pools down below us and several people were ballsy enough to jet off the hiking trail and go rogue down the side of the mountain on their own so they could swim in these pools. No thanks said this Texas girl. I'll hit the beach later. :) I was able to get this shot of the crashing waves against the rocks on this hike and it's grown on me. The more I look at it the more I like it. You can get this shot printed on several different products through my storefront at Fine Art America but I thought it would be fun to highlight the yoga mat today b/c we're all in need of some calm, peace and tranquility during this Covid shelter in place. If you need a beautiful, soothing yoga mat to accessorize your work out then this is for you!

Fine Art America Storefront | My Beach Photos are for Sale!

Hi all! I'm super excited to announce that I've open a storefront at Fine Art America to sell some of my beach photos on products! I've had to get really creative during this Covid-19 lock down and I had a good friend, Shawn Vincelette, recommend that I set up a storefront here. I'm going to try and feature different products of mine that would make great art work to hang in your house, home decor items to freshen up stale spaces or great gifts for family and friends. Today's feature product is my pom pom pillow! Let's brighten up the couch for summer with some cheerful pillows. It's an easy and low expense way to freshen up your living room or even better the kids play room. Don't you LOVE it? You can purchase pillow here! 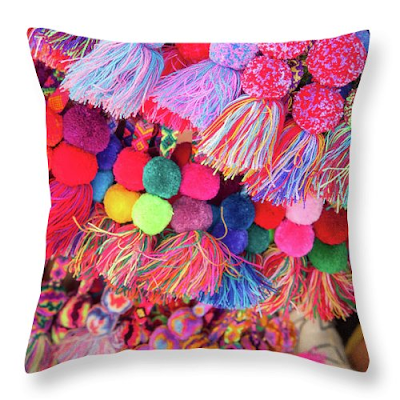 I'm so glad we were able to get Vaughan's senior shoot finished before all the shelter in place restrictions happened. This particular shoot is another one that hits me right in the gut because I've known this guy since he was a baby. Vaughan was in the same playgroup as my son so I've watched this guy grow up since he was just a tiny nugget. It's going to be exciting to see what this guy does with his life. He's one smart dude! I think he was doing multiplacation tables at two years old. Haha! I had a great time photographing him and we had some good laughs during the shoot. We incorporated the Austin transit bus system in his shoot because he used to be an avid bus rider and "master of the bus schedule" before he had his license. During the shoot, he still recognized the bus numbers and was telling his mom and I a few of the busses schedules and routes. Then, we headed down the road to the 512 Brewery and got some pretty cool shots of him on some dead end train tracks with his Mac book sporting his UT Dallas shirt where he'll be attending in the fall (hopefully)! The hopefully is for students getting to return to campuses in the fall not hopefully that he'll get accepted. He's already been accepted! Haha! Our last portion of the shoot was a bit more colorful and we had a great time shooting at Ion Art where he sported his LASA shirt from high school. Thanks to the guys from Ion Art who saw us shooting after hours and came back over to turn on the neon sign for us! That's what I love about Austin! I wish it would've been a bit darker out side to see the drama of the signs but they still looked cool in our photos as is. Grab a morning mocktail or a healthy smoothie and kick back and enjoy Vaughan's senior shoot video. Wishing this guy the absolute best to his exciting future.
#seniorpictures #seniorportraits #senior #photography #portraitphotography #photographer #classof2019 #seniorpics #portrait #senioryear #seniorphotographer #seniorinspire #seniorphotography #seniorstyleguide #senioryearmagazine #seniorphotos #photoshoot #modernsenior #nikon #graduation #thetwelfthyear #photooftheday #portraits #theseniorcollective #classof2020 #highschool #seniors #model #atxseniorphotographer #atxseniorphotos #movinon #growinup #brandinellisphotography

Like all business right now we're all adapting. We're in the midst of our shelter in place so I'm no longer able to see clients and do in studio photo viewings so I'm posting their videos here on the blog so clients don't have to wait to see their photos. I'm so happy I photographed Jack before all the Covid restrictions happened. We got some great shots of him on his high school's property and brand new football/lacrosse field which looks absolutely amazing. I know this year is a tough year for the class of 2020 which makes it even more important to document this senior year during this historical time in our world. Grab your quarantine drink (which most likely has alcohol in it;)) and some chips and dip and kick back and watch this awesome video of Jack!